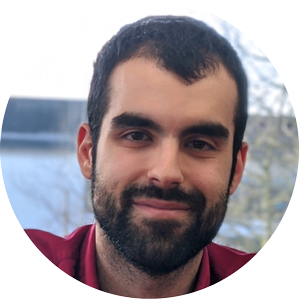 Georgios’ research work focuses on developing novel in vitro pulmonary models of the respiratory tract. The establishment of human Airway organoids was only recently described.  Airway organoids hold promises for addressing some of the limitations of the current gold standard in vitro lung model, the Air-Liquid interface, which include their limited utilization in High-Throughput studies and inability for long-term expansion. However, one of the drawbacks of the organoid culture system is the polarity of the cultured organoids. The exposure of the organoid basal side to the medium does not recapitulate the in vivo conditions, where the apical side is exposed to the environment. Georgios aims to address this issue by developing a protocol that would allow the exposure of the organoid’s apical side to the medium and the utilisation of the resulting organoids in viral studies. Moreover, Georgios is working towards the development of a robust in vitro organoid model of the alveolar region. Utilisation of current in vitro models is limited, mainly due to the difficulties of the maintenance of a primary stem cell population, and the subsequent differentiation of it. Thus, research is limited to immortalised cell lines, which lack relevance, and in vivo models. The organoid culture system has allowed the propagation of other epithelial cell types, such as those from the intestinal epithelium, which were unable to proliferate in 2D cultures. Georgios main focus is to define the factors that will allow the propagation and differentiation of primary human alveolar cells. This work would ultimately lead in the utilization of the resulting organoids in functional and viral studies, and into a commercially available product for the generation of human Alveolar organoids.

STEMCELL Technologies Inc. is a privately-owned biotechnology company based in Vancouver that helps power leading-edge life science research around the world. Scientists performing stem cell, immunology, cancer, regenerative medicine and cellular therapy research are among those who rely on our cell culture media, cell separation products, instruments, ancillary reagents and contract assay services. We create novel, useful, standardized products of unfailing quality and deliver them to more than 70 countries via our many regional offices plus distribution centres in Vancouver, Seattle, Grenoble and Singapore.  Driven by our love of science and our passion for quality, we see ourselves simply as “Scientists Helping Scientists” – standing by our customers to provide outstanding products, technical support and training.  We have over 1000 science-oriented employees globally, including 250 PhDs/MScs, with most others holding a BSc or engineering degree.  STEMCELL is proud to be the largest Biotechnology employer in Canada.

STEMCELL is continuing to expand its European operations, particularly in the areas of R&D personnel and facilities, manufacturing, quality control, quality assurance and regulatory activities that will meet the highest levels of European research and regular standards. STEMCELL UK Ltd. (STUK) was established in July 2014. In 2016 STUK expanded its capabilities to include research and development (R&D) with staff located in laboratory space in Cambridge, UK, including fully functional laboratory space containing state of the art cell culture and analytical chemistry equipment as well as an ISO 13485-certified manufacturing clean room that is adopting single use technology and closed systems for manufacturing higher compliance media and culture reagents.