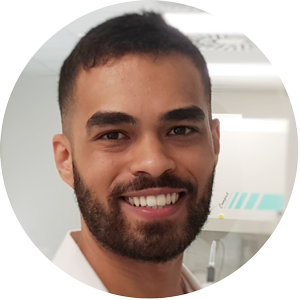 Igor Coqueiro is a PhD student in the Organovir program and is carrying out his research project at Université Clermont Auvergne. During his Bachelor studies in Biotechnology at the Multidisciplinary Institute of Health of the Federal University of Bahia (IMS/CAT-UFBA) (2016), he investigated the effects of natural compounds on the physiopathology of microorganisms. After finishing his Bachelor studies, Igor did his Masters in Biological Sciences (Genetics) at the Ribeirão Preto Medical School (FMRP-USP) (2019), where he conducted the cell fate decision of human embryonic stem cells (hESCs) in hematopoietic linage for performing functional analysis by high-content screening (HCS). Currently, he is involved in a project that aims to use induced pluripotent stem cells (iPSCs) as a source of cells for developing a physiologically relevant model of the human blood-brain barrier (BBB) for studying the neurotropism and pathogenicity of Enterovirus.

A network of capillaries covers the whole brain and protects this microenvironment from pathogens, and toxic agents that are eventually present in the blood flow. These capillaries are for the majority composed of human brain microvascular endothelial cells (HBMEC) that interact with other cell types such as pericytes, astrocytes, and neurons and form neurovascular units (NU). The complex cellular interaction in the NU supports a peculiar characteristic of the HBMEC, which displays a continuous expression of specialized proteins that form a blood-brain barrier (BBB). Induced pluripotent cells (iPSC) can generate any cell type, including HBMECs, that under specific conditions acquire BBB phenotypic properties. Many efforts were made for developing cellular models that mimic with high proximity the characteristics of BBB using the culture of HBMECs and even co-culturing these cells with neural cells. Several pathogens, among them neurotropic enterovirus (EVs), can affect the BBB. The invasion of EV to the brain can lead to dysfunction of permeability properties of BBB that compromise the homeostasis of a neural microenvironment and evolve into encephalitis.

Igor’s research project aims to investigate how the EVs cross the BBB. For such studies, Igor will use a robust and physiologically relevant cellular model of BBB deriving cells from iPSC.  In the experiments, Igor will evaluate the susceptibility of HBMECs as well as neural cells to different serotypes of EVs. Next, different protocols to build a robust and physiologically relevant BBB model will be tested, followed by infecting these models with the EVs serotypes.  Igor has planned a four-month secondment at the Technical University of Denmark to integrate the technology of microfluidics on the BBB model for performing analytical measurements.

About the University Clermont Auvergne

Université Clermont Auvergne (UCA) is a multidisciplinary higher education institution located in Clermont-Ferrand, a city located in the middle of France. With 35,000 students, including 4,600 (13%) international ones, and 3,300 staff, UCA plays a key role in the territorial structuration and the building of a European level region. Its 20 Faculties and 5 Doctoral Schools offer more than 170 training programs.

It also hosts 39 research units and laboratories and is committed in several laboratory of excellence, regional clusters and competitiveness centres. The UCA and its regional partners are one of the 12 major research centres in France to have been awarded the I-Site label (in 2017) (Initiatives – Science – Innovation – Territories – Economy), which puts the Clermont-Ferrand university site on the map of excellence in higher education and research at national and international level.

UCA is participating to Organovir on behalf of the LMGE joint research unit between UCA and the ‘Centre National de la Recherche Scientifique’ (CNRS). Among the 6 teams of LMGE, the EPIE team takes part in the Organovir project.

The EPIE team works in close relationships with the department of medical virology and the National Reference Center (NRC) of enteroviruses and parechoviruses at the University hospital of Clermont-Ferrand. The activities of the NRC comprise the epidemiological and clinical surveillance of enterovirus infections.