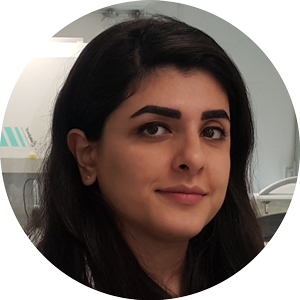 Mahya Hosseini Bondarabadi graduated with a Bachelor in General Biology from Shiraz University in Iran. She joined the Royan Cardiovascular group in 2016 to obtain her Master’s degree in Developmental Biology from the Royan Institute in the Department of Stem Cell Biology and Regenerative Medicine. There she learned how to use Primary/iPSC-derived cell lines for regeneration, disease modeling, and drug screening throughout different projects. Fascinated by biofabrication and three-dimensional (3D) in vitro modeling, she moved from Iran to France to do her PhD at Clermont Auvergne University as Early Stage Researcher 4 of the OrganoVIR programme.

Mahya joined OrganoVIR in September 2019. Her research focuses on developing an in vitro 3D skin model as a platform to study the pathophysiology of Hand, Foot, and Mouth Disease (HFMD), a common contagious viral infection in young children that sometimes can involve the central nervous system, heart, and liver and cause severe complications. HFMD is usually caused by several strains of enteroviruses. So far, there is no specific treatment for this disease. Thus, Mahya is working on a comparative genomics analysis of different strains of enteroviruses. Therefore, to investigate the interaction of different strains of enteroviruses and multiple cell lines present in the skin tissue model, including human keratinocytes, dermal fibroblasts, endothelial cells, immune cells, and neural cells, she is going to develop a multilayered, full-thickness human skin equivalent based on a neuro-immuno-cutaneous system. Subsequently, a comprehensive approach to study how the relevant enteroviruses hijack the biosynthetic capacity of the host cells to produce virus progeny will be considered. Finally, she is going to elucidate the role of host immune cells in virus dissemination via the bloodstream. She works under the supervision of Audrey Mirand, a clinical virologist at the university hospital of Clermont-Ferrand.

About the University Clermont Auvergne

Université Clermont Auvergne (UCA) is a multidisciplinary higher education institution located in Clermont-Ferrand, a city located in the middle of France. With 35,000 students, including 4,600 (13%) international ones, and 3,300 staff, UCA plays a key role in the territorial structuration and the building of a European level region. Its 20 Faculties and 5 Doctoral Schools offer more than 170 training programs.

It also hosts 39 research units and laboratories and is committed in several laboratory of excellence, regional clusters and competitiveness centres. The UCA and its regional partners are one of the 12 major research centres in France to have been awarded the I-Site label (in 2017) (Initiatives – Science – Innovation – Territories – Economy), which puts the Clermont-Ferrand university site on the map of excellence in higher education and research at national and international level.

UCA is participating to Organovir on behalf of the LMGE joint research unit between UCA and the ‘Centre National de la Recherche Scientifique’ (CNRS). Among the 6 teams of LMGE, the EPIE team takes part in the Organovir project.

The EPIE team works in close relationships with the department of medical virology and the National Reference Center (NRC) of enteroviruses and parechoviruses at the University hospital of Clermont-Ferrand. The activities of the NRC comprise the epidemiological and clinical surveillance of enterovirus infections.