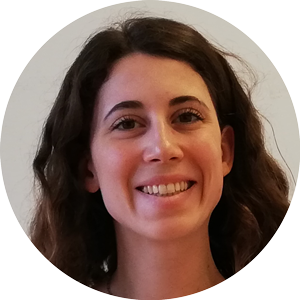 Giulia Moreni is from Milan, Italy. She holds a BSc in Biology and a MSc in Biology Applied to Research in Biomedicine from the University of Milan. She has been awarded a fellowship by the FIRC Institute of Molecular Oncology (IFOM) to perform her Master internship at the National Institute of Stem Cell and Regenerative Medicine (InStem) in Bangalore, India. There she worked one year trying to understand the role of RNA binding proteins in stem cell function and tissue organization during planarian regeneration. That experience helped her to broaden her mindset and strengthen her self-esteem and to realize she wanted to become a scientist. She moved back to Milan and joined the National Institute of Molecular Genetics (INGM) where she worked in the laboratory of Massimiliano Pagani on the immunology of colorectal cancer using organoids. This fascinating new technology captured her curiosity and two years later she found in Organovir the perfect opportunity for her career. She is now a PhD student at the University of Amsterdam working at the Amsterdam UMC.

Giulia is currently working at the Amsterdam UMC in the Laboratory of Clinical Virology within the Department of Medical Microbiology. Her project focuses on the propagation of uncultivable Enteroviruses (EVs) and Parechoviruses (Pevs) in human 3D models. EVs and Pevs are non-enveloped positive single-stranded RNA viruses which belong to the Picornaviridae family. They mainly affect children causing a variety of clinical symptoms ranging from asymptomatic or mild respiratory and/or gastrointestinal infection to severe neurological syndromes. Recently new EVs and Pevs genotypes have been discovered but due to their poor cultivability on cell lines they are not well described and characterized. Therefore, her goal is to develop alternative 3D models suitable for infection which are able to faithfully recapitulate the human features. She will use the human airway epithelium (HAE) to mimicking the airway, the human intestinal epithelium (HIE) for the gut and iPSC derived brain organoids for the human central nervous system. During her PhD trajectory she will have the opportunity to work for seven months at the National Institute for Public Health and Environment (RIVM) in Bilthoven, The Netherlands where she will bring HAE technology. In return, she will learn Next Generation Sequencing and virus typing together with the possibility to work on some interesting patient samples. Later on during her PhD she will join the University of Clermont Auvergne in France to learn the mini-brain model.

Amsterdam University Medical Centers (Amsterdam UMC) is one of the foremost research institutions in the Netherlands and one of its largest hospitals, with 1500 staff members employed in medical research. The Amsterdam UMC research is organized in 7 themes within the AMC Research Institute, where AMC Principal Investigators (PIs) are appointed to develop their own research lines. The AMC Graduate School organizes doctorate level academic training of AMC PhD students (209 PhD rewarded in 2016). This concentration of expertise makes the center a breeding ground for fruitful scientific collaborations.