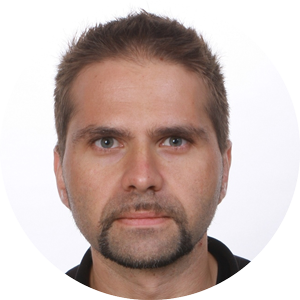 Krzysztof Pyrc is a molecular virologist appointed as professor at the Malopolska Center for Biotechnology of the Jagiellonian University in Krakow, Poland. He is the leader of the Virogenetics research group, focusing on early events during viral infection and development of novel antivirals. Within Organovir he will focus on coronaviral infections in 3D cultures. He will host 2 ESRs and will serve as the “UNDERSTAND” Work Package leader.

The team of prof. Krzysztof Pyrc works at two faculties: Faculty of Biochemistry, Biophysics and Biotechnology (FBBB) and Malopolska Center of Biotechnology (MCB). The first unit is teaching/training-oriented, the second unit (with high-containment laboratories) functions as a R&D unit, with state of the art facilities. FBBB JU is the best biology/biotechnology faculty in Poland, according to the 2017 governmental scientific unit assessment. The MCB is the first University – based research institute and at the same time the excellence center. It gathers excellent internationally renowned scientists and laboratories (including Max Planck laboratory and CNRS), and periodic evaluation of researcher coordinated by the independent, international advisory board ensures high scientific quality.

The focus of the research group is on the understanding of the infection process of human viruses and the interplay between the virus and the host cell, and translation of these results to the applicatory field. They have recently developed several virus inhibitors, some are in the stage of (pre-) commercialization (HTCC compound for animal coronaviruses, NSPAH polymer as broad antiviral compound, www.virogenetics.info). The teams’ expertise with human 3D cell culture models encompasses mainly human airway epithelium (HAE) cultures formed by primary human epithelial cells on an air/liquid interphase. They have successfully cultured type I and type II pneumocytes. Clinical material preparation (human lungs), cell isolation and differentiation are carried out in house. Further, the methods allowing for modification of 3D cultures (lentiviral gene engineering, gene silencing, co-cultures) and analysis (confocal microscopy, 3D virtualization, SEM, superresolution microscopy) allow to study viral infection in the context of natural tissue.