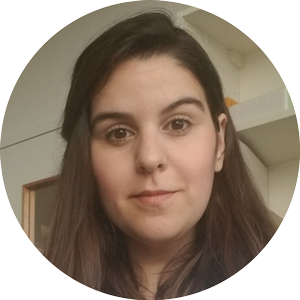 Mariana da Rocha Soares Guedes is originally from Portugal, where she completed her Bachelor Degree in Biomedical Sciences and Master Degree of Molecular Biomedicine at the University of Aveiro. After graduation, Mariana was invited by Dr. Gomes-Solecki to conduct research in spirochetal diseases and diagnostics as a MSc. Assistant in the USA, where she worked until being selected as an Early Stage Researcher for the OrganoVIR training network. Mariana is currently enrolled as a PhD student at the University of Geneva, working on her project under the supervision of Dr. Tapparel Vu.

Mariana’s research project is being carried out at the Department of Microbiology and Molecular Medicine of the University of Geneva, Switzerland.  For her project, she aims to study the interactions of respiratory Rhinoviruses and Enteroviruses with the natural respiratory microbiota. The nature of interactions between viruses and commensal bacteria will be assessed in immortalized cells, in primary human airway epithelium (HAE) cells and further confirmed in air-liquid interface HAE cultures.

She will start by studying Haemophilus Influenzae, Pseudomonas aeruginosa, Staphylococcus aureus and Streptococcus Pneumoniae, as these are the most prevalent bacterial species found in the respiratory microbiota of healthy individuals. Interestingly, these bacteria are commonly found in dysregulated levels in certain respiratory diseases, such as asthma, cystic fibrosis and COPD.

After an initial screening in cell lines, if consistent enhancement or inhibition of viral binding, attachment or replication is observed, the project will move on to ALI-HAE experiments at Epithelix Sàrl, (where Mariana will participate in two secondments), for confirmation, biological relevance and reproducibility in a relevant ex-vivo model. Afterwards, Mariana will attempt to dissect the mechanisms of action involved in these interactions and, lastly, the effect of the same bacteria on other respiratory viruses (RV-B and RV-C as well as RSV, Flu and OC43) will then be analysed.

About the University of Geneva

The Faculty of medicine of the University of Geneva Medical School (an important research institution in Switzerland) leads internationally recognized research, in partnership with the largest hospital complex in Switzerland, the Geneva University Hospitals (HUG). Over 250 research groups are divided into three main sections (fundamental, clinical and dental medicine) showing a major translational research capacity. The Department of Microbiology and Molecular Medicin (MIMOL), one of the six departments leading fundamental research, studies the biology of microorganisms (parasites, fungi, bacteria and viruses), and their interactions with the infected host. The Biology-Medicine PhD school supervises and educates students who undertake a PhD thesis in life sciences within the Faculty of Medicine.